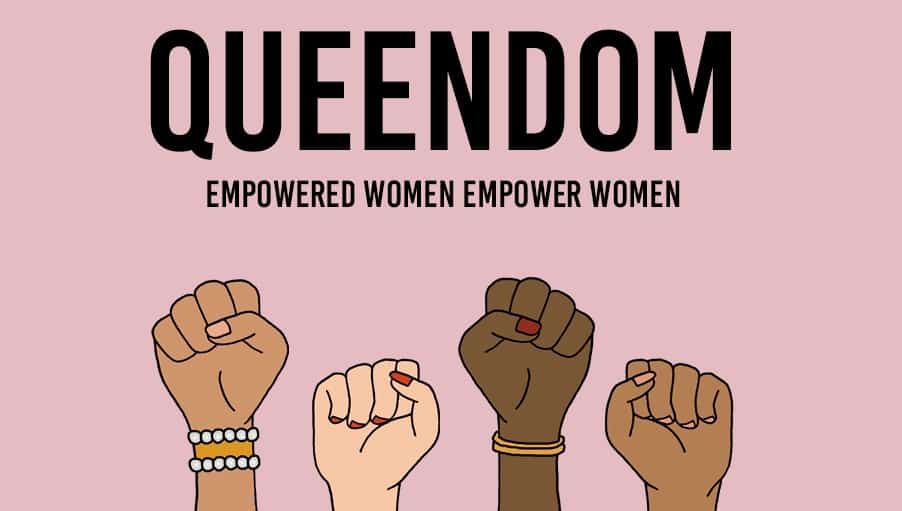 Celebrating women only in March isn’t enough! As there is no way anyone or anything can capture all the wonderful, life-changing, and impactful contributions by women in a mere 31 days. I find great pleasure in seeing and experiencing women uphold the crowns of their sister-friends. I would refer to this phenomenon as an awakening of sorts. It’s a 21st-century women’s movement that gives us all the power to feel like a Queen.

The word “queendom” has taken on a new light and has flooded multiple platforms such as salons, interviews, social media posts, books, articles, and blogs like this one. There’s a very diverse cross-section of women—young, as well as the seasoned and professional—who represent this new perspective in a woman’s life. One that offers multiple narratives and room for HER at the table, despite the messaging that we must compete. This moves us past the traditional ideas and shatters the paradigm of who can be a queen.

When one thinks of a queen, most people instantly think of women like Queen Elizabeth. The royal family has always been at the center of attention, if for nothing else than their elite status in society or their current challenges steeped in racism, inequity, and white privilege.

But their lack of sensitivity and compassion doesn’t prevent women from different walks of life from speaking their queendoms into existence. Many women-owned businesses have logos of a crown that represents their royal elegance. There are young college females rocking t-shirts that declare their current state of mind. There are also a large number of Instagram handles and posts that contain a version of the word.

With this, and in the spirit of women and paying homage to all the brave and dynamic trailblazers who came before us, the title is fitting. I remember watching an interview Jill Scott gave right before taking the stage at a concert. At this point of HER career, she was a new voice in the Neo-Soul space and was performing after Erykah Badu. A male interviewer asked her if she was nervous due to the lineup. Jill gave a cute chuckle and replied sweetly, “Have you ever seen me perform?” But it was her poised upper-cut and eloquent knock-out punch that rocked MEE and the reporter to sleep.

Jill expounded, “We all have our own thing, that’s the magic. Everyone comes with their sense of strength and their own Queendom. Mine can never be compared to hers and hers can never compare to mine.” It was clear that Jill understood her assignment. She and Erykah weren’t in competition with one another. As both singers bring their charisma, grace, and confidence to the stage and that’s what makes them both equally powerful. Talk about a bold way to not allow anyone to compare her with another woman. She is a singer that’s just as talented, beautiful, and successful as Erykah. Moreover, Jill did not fall prey to the interviewer’s line of questions by minimizing either of their crowns.

Just think, if all women exercised their agency, shared their voices, and supported the public display of crown praising for all women. The conversation about competition would be nonexistent and women would spend more time collaborating and supporting one another. Causing a shift in attitudes and offering a safe space for all girls to grow up feeling not only empowered but also secure in their shoes, sneakers, or boots.

Imagine it … a room full of women no matter where you are, there to clap for you in truth, solidarity, and sisterhood. The rooms would explode with women shouting in unison, “let all the queendoms flourish.” Playing interference for the different, odd, peculiar, and majestic ways women show up as queens.

The truth of the matter is, as women we should use our positions and power to catapult, leverage, and offer opportunities for one another. It’s time for women to rise, stand tall, and unite to inspire as we lock arms after affixing our crowns.

Regardless of how you see and or define queendom, it’s important to know that a crown has been reserved just for you! Sis, wear it with pride and respect and demonstrate to other women watching that there’s space for them to thrive. We are all strong, confident, resilient, and more fearless than we could ever imagine.

Hail to the Queen in You!

Having the pleasure of working in Higher Education comes with a variety of experiences. At any given moment, I could be embracing a student in

What’s In A Name?

So, after my last blog I had a good friend call and asked. Why did your mother name you Tamara? Instantly, a huge smile came before me.

Mrs. Kearney was her name. She stood less than 5 feet tall, but was one of the most powerful teachers at school 80.

My aim is to share with you the tools. kits, tricks and strategies I've spent thousands of dollars on, the numerous years in college and earning certifications; so you can be delibHERate about your life! The last greatest freedom is the freedom to decide. And today... you have decided to paddle your own canoe.